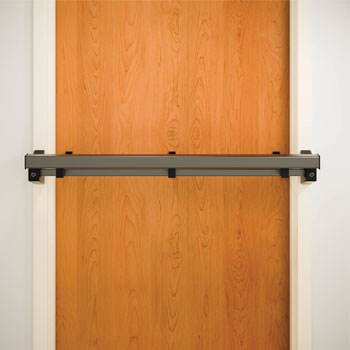 n the wake of any tragedy, society struggles collectively to process the loss. For some, it is the loss of friends and loved ones, but for most, it is the feelings of safety and trust that are diminished. In their place, is an overwhelming desire to do something to prevent it from ever happening again.

The reaction to some tragedies, such as the Triangle Shirtwaist Factory fire of 1911 or the Cocoanut Grove nightclub fire in 1942, resulted in sweeping changes to fire and life-safety codes that have unquestionably saved lives and prevented an incalculable number of similar events. However, in response to the horror of more recent school shootings, the urge to take action motivated some school districts to enhance the security of classroom doors with barricade devices—many of which not only violate current code requirements, but could also result in increased risk and liability.

By definition, ‘barricade’ means, “to block (something) so people or things cannot enter or leave.” Most codes require doors in a means of egress to provide free passage at all times, which allows building occupants to evacuate quickly if necessary. Some proponents of barricade devices suggest because the device is intended for use only when an active shooter is in the building, securing the door takes priority over allowing safe evacuation. Those on the other side of the debate believe because there is no guarantee the device will only be employed under these limited circumstances, it could be misused, preventing authorized access by staff and emergency responders, as well as delaying or preventing egress.

Over the past few years, this argument has raged across the nation, with code officials caught in  the middle, struggling to ensure life safety is not compromised in the rush to enhance classroom security. As a result, there are several model code changes in progress that will affect product selection and specification for doors in K–12 schools, colleges, and universities. However, many state and local jurisdictions are already implementing their own policies and some of the security devices currently being installed or requested by educational facilities for new and existing projects may not comply with the new model code requirements. This article will outline those upcoming code changes and the code-compliant security methods that should be specified to enhance both the safety and security of students and teachers.

Code considerations
The model codes are revised on a three-year cycle  to account for changing environments and new technologies, using a consensus process with careful consideration by technical committees and ample time for public comment. In an attempt to address the issue of barricade devices in the 2018 International Building Code (IBC), the following language has been approved:

In Group E and B educational occupancies, egress doors from classrooms, offices, and other occupied rooms shall be permitted to be provided with locking arrangements designed to keep intruders from entering the room where all of the following conditions are met:

1. The door shall be capable of being unlocked from outside the room with a key or other approved means.

2. The door shall be openable from within the room in accordance with Section 1010.1.9.

3. Modifications shall not be made to listed panic hardware, fire door hardware, or door closers.

This language will apply to K–12, college, and university classrooms, offices, and other occupied rooms. If the rooms are lockable, they must be able to be unlocked from the outside and they must meet the requirements for egress—one operation to unlatch, no keys, tools, special knowledge or effort, and no tight grasping, pinching, or twisting of the wrist. Similar language is under consideration for other model codes.

Meanwhile, in an effort to provide some guidance for those seeking to increase classroom security, the National Association of State Fire Marshals (NASFM) has published a set of guidelines that includes a “Suggested Classroom Door Checklist,” and identifies many parameters that should be satisfied when selecting and installing security hardware in classrooms. These include:

The NASFM guidelines note these requirements may be mandatory depending on applicable codes, laws, and regulations. The IBC, International Fire Code (IFC), and/or National Fire Protection Agency (NFPA) 101, Life Safety Code, have been adopted  in most states, and include the egress, fire, and accessibility requirements in NASFM’s checklist.

At NASFM’s 2015 annual conference, members approved a resolution supporting the group’s “Classroom Door Security & Locking Hardware” guidelines. In an excerpt from this resolution, the  state fire marshals warn against the use of classroom barricade devices:

Local jurisdictions
Many code officials have responded to questions about school security by reiterating that egress doors (including classroom doors) must meet the requirements of the adopted codes. Although efforts are underway to incorporate school security requirements into the model codes, states and local jurisdictions have been busy issuing their own directives on this issue, with mixed results.

Florida and California have already adopted requirements or guidelines that are more stringent than the current model codes. They require classroom doors to be lockable from the inside, with classroom security locks being the preferred lock function.

However, in Arkansas, the Senate voted unanimously to amend the fire code requirements and allow the use of barricade devices despite the strong objections of the state fire marshal who noted potential issues with emergency egress and removal of the device—as well as the financial interest of an Arkansas state legislator in a company that manufactures barricade devices.

In Ohio, a law was passed which forced the Ohio Board of Building Standards  to modify the state codes in order to allow classroom barricade devices to be used. The board had previously held hearings to gather testimony and created a report to support their conclusion that no changes should be made to the current building and fire codes. However, because of the new law, the state code had to be changed regardless of the board’s position, and certain types of classroom barricade devices are now allowed in Ohio schools.

Other states have independently issued directives or adopted various code changes. For example, Colorado has adopted a code change that allows temporary security measures only until January 1, 2018. The state fire marshal in Kansas issued  a memo allowing temporary security devices to be used, while Louisiana allows  a deadbolt that requires one additional operation to unlatch the door. Further, New Jersey permits some types of devices, but not others.

The only thing these policies have in common is a startling inconsistency from one state to the next. Therefore, it is more important than ever to be aware of local code requirements, including the jurisdiction’s position on barricade devices.

Code-compliant alternatives
The reasoning behind these proposed changes is often based on the misconception that barricading the door is the only way to protect students and teachers in the classroom. There are code-compliant locks readily available from many manufacturers that provide the needed security without compromising safety in favor of lower cost. While locks address one aspect of classroom security requirements, there  are other factors to consider, such as the door, frame, glass, key distribution, communication, and lockdown procedures. Many school security experts recommend classroom security locks, which can be locked from within the classroom using a key (mechanical locks) or electronic fob (electrified locks). (The Partner Alliance for Safer Schools can be viewed at passk12.org/wp-content/uploads/2015/11/PASS-White-Paper-Classroom-Barricade-Devices-Final.pdf).

The final report of the Sandy Hook Advisory Commission, convened in the wake of the 2012 tragedy, included many recommendations for school safety. Their recommendation includes that classroom doors should be lockable from inside the classroom. This is because, as the report notes:

The testimony and other evidence presented to the commission reveals that there has never been an event in which an active shooter breached a locked classroom door.

It is also important to note a 2007 study, “Barricaded Hostage and Crisis Situations in Schools: A Review of Recent Incidents,” examined 19 such hostage situations that occurred between 1998 and 2007. In 16 of the 19 cases, the perpetrator was a student at the school—meaning the threat was already in the room.

There are a number of lock functions that can be used in schools, depending on existing conditions, the needs of the facility, and the budget. All lock functions that would typically be installed on a classroom door allow free egress as well as authorized access by staff and emergency responders, and will provide the necessary balance of life safety and security for teachers and students.

Conclusion
The instinctive reaction to school shootings is to provide preventative methods to protect students and teachers from the line of fire. However, the desire to react quickly and within budgetary restrictions sometimes leads to choices that may solve one problem but inadvertently create another. The requirements for free egress, fire protection, and accessibility must be considered in conjunction with security. Unauthorized lockdown and emergency responder access are important considerations, although they are not currently addressed by the model codes.

Upcoming changes made to codes or laws at a national level will establish more consistent requirements than addressing this issue individually. However, when working to increase the security of an educational facility—or any type of building—an all-hazards approach should be taken, considering not just active shooters and terrorism, but also fire, severe weather, natural disasters, and other types of emergencies. There is never a sound reason to sacrifice life safety in favor of security.

Lori Greene, DAHC/CDC, CCPR, FDHI, FDAI, is the codes and resources manager for Allegion. She has been in the industry for more than 30 years, and used to be a hardware consultant writing specifications. Greene is a member of CSI, the Door and Hardware Institute (DHI), the International Code Council (ICC), the National Fire Protection Association (NFPA), and the Builders Hardware Manufacturers Association (BHMA) Codes and Government Affairs Committee. She has a monthly column on code issues in Doors & Hardware, and blogs at www.iDigHardware.com. Greene won The Construction Specifier Article of the Year Award. She can be contacted via e-mail at lori.greene@allegion.com.