As students and teachers start counting the days until school ends, school administrators are busy making plans for renovations that will take place during the summer months. For many, their focus will be concentrated on evaluating and enhancing their facilities’ security measures.

In the wake of several highly publicized school shootings, school officials are facing mounting pressure from parents, students and teachers to increase security measures on campus. For many administrators who are already struggling to juggle the many challenges involved in running a school, the process of evaluating and expanding security can feel overwhelming. Where to begin? Who should be involved? What types of security measures will be most effective?

“The job of a school administrator and school board member is both very rewarding and very difficult,” says Mark Williams, senior architectural consultant for Allegion, who also serves as the steering committee director for Partner Alliance for Safer Schools (PASS). As is suggested in the PASS Safe Schools Guidelines, “The challenges faced on a daily basis with tight budgets, reporting requirements and accountability to parents and agencies require a focused level of leadership that could vex the most seasoned CEO. With hundreds of thousands of students being attacked each year, mitigating the risks associated with in-school violence is a major fiscal, legal and moral challenge for school officials. It requires careful planning, expert advice, and financial and other resources.”

While school shootings have commanded the lion’s share of media attention in the last few years, these events are unlikely to be the types of emergencies schools must deal with. It’s important for officials to take what’s known as an “all hazards” approach, ensuring their staff and facility are prepared for any emergency event.

“There are three kinds of emergencies that schools should prepare for,” says Paul Timm, vice president of Facility Engineering Associates. “The first are the type people tend to fear the most—violent events such as an active shooter. Second are environmental emergencies such as tornadoes or flooding. And the third are medical emergencies.”

Timm and Williams both recommend that schools begin by conducting a security assessment of their facilities. Not only will this help to identify and prioritize areas that need to be addressed, it will also help to prevent scarce financial resources from being wasted on products that are ineffective, unsafe or non-compliant with existing or future security systems.

There are many different ways to conduct an assessment. The Department of Homeland Security has created a checklist and online assessment tools are available as well. Timm suggests focusing on four specific areas during an evaluation: Deterrence, Detection, Delay and Response.

Delay – Examine the barriers that would slow perpetrators—windows, doors, locks, closers. Do perimeter doors close and latch securely? What sort of key control system is in place?

Response – If there is an incident, who is going to help? Teachers are often the first responders at a scene. What type of training do they have? What tools are at their disposal? Do they know CPR or have access to a defibrillator?

As part of the assessment process, there are a number of resources that can be used to determine the probability of a security incident occurring. PASS suggests utilizing the following:

Although school administrators should absolutely be involved in the assessment process, having outside experts involved will yield more accurate results.

Williams suggests following the PASS recommendations of taking a team approach with a cross functional group of individuals including:

Another source of expertise that is readily available to school officials but frequently overlooked is the students themselves. “Particularly in the aftermath of the Parkland tragedy, students want to be more involved,” says Timm. “Schools have really kept them at arm’s length and that’s a mistake. No expert is going to be more aware of potential threats and security vulnerabilities that are unique to a school than the students themselves. We have to include them more and there are a number of ways to do it—conducting surveys, putting them in places where they help with mass notification, tip lines. There are several options, but we absolutely have to start working with them more.”

No matter who is ultimately chosen to take part in the assessment process, the biggest challenge will be overcoming their individual biases. “Some people will rely on subjective experience,” Timm explains. “If you bring experience alone to the assessment, it will color your findings. That’s a bias. If someone is really hoping they are going to get something—say a security contract for instance—then it’s a bias. It’s not the same sort of experiential bias, but it’s an agenda that will color the outcome. There’s also ‘expert bias,’ consultants who will come in and say ‘step out of our way because we are the experts and we will tell you what you need.’ You really need a team of experts to offset any bias or lack of knowledge that any one person might have.”

Consulting experts will also help school officials avoid what Williams says is the biggest mistake made by many schools in their efforts to increase security—making emotional decisions without understanding the impact of those decisions. This often results in the purchase of security devices that solve non-existent problems or, worse still, violate life safety codes or Americans with Disabilities Act (ADA) standards. A particularly egregious example can be seen in the rush by many schools to install aftermarket products known as barricade devices. Although most are effective at preventing intruders—or emergency responders—from entering a room, they can also prevent occupants from exiting, which violates life safety codes and ADA federal law. And as Williams points out, they are a clear example of a product solving a

“The Sandy Hook Advisory Commission noted in their report that there is not a single documented instance of an active shooter breaching a locked door,” he explains. “We already have safe, code-compliant solutions that work.”

An important goal of conducting a security assessment is to ensure the proper balance exists between security and convenience. If a facility’s security measures are too stringent, its occupants are much more likely to find workarounds that create security vulnerabilities like propped open doors.

Layered security begins with defining the perimeters of the school from the property perimeter to the individual classrooms and other shelter-in-place locations inside the building.

As one layer is bypassed, another layer provides an additional level of protection. The asset being protected, in this case the students and teachers, is at the center of the layers.

“When looking at their building perimeter, school officials should be classifying the openings as either primary or secondary,” Williams explains. “Primary openings are going to be the main entrance to the school where students enter the building and where visitors come to a secure vestibule to register to be in the building. All building perimeter openings, both primary and secondary, should be monitored for both door position and latch bolt position. Also, the classroom and other shelter-in-place doors should be capable of being locked from either the inside of the classroom or from an access control system.” 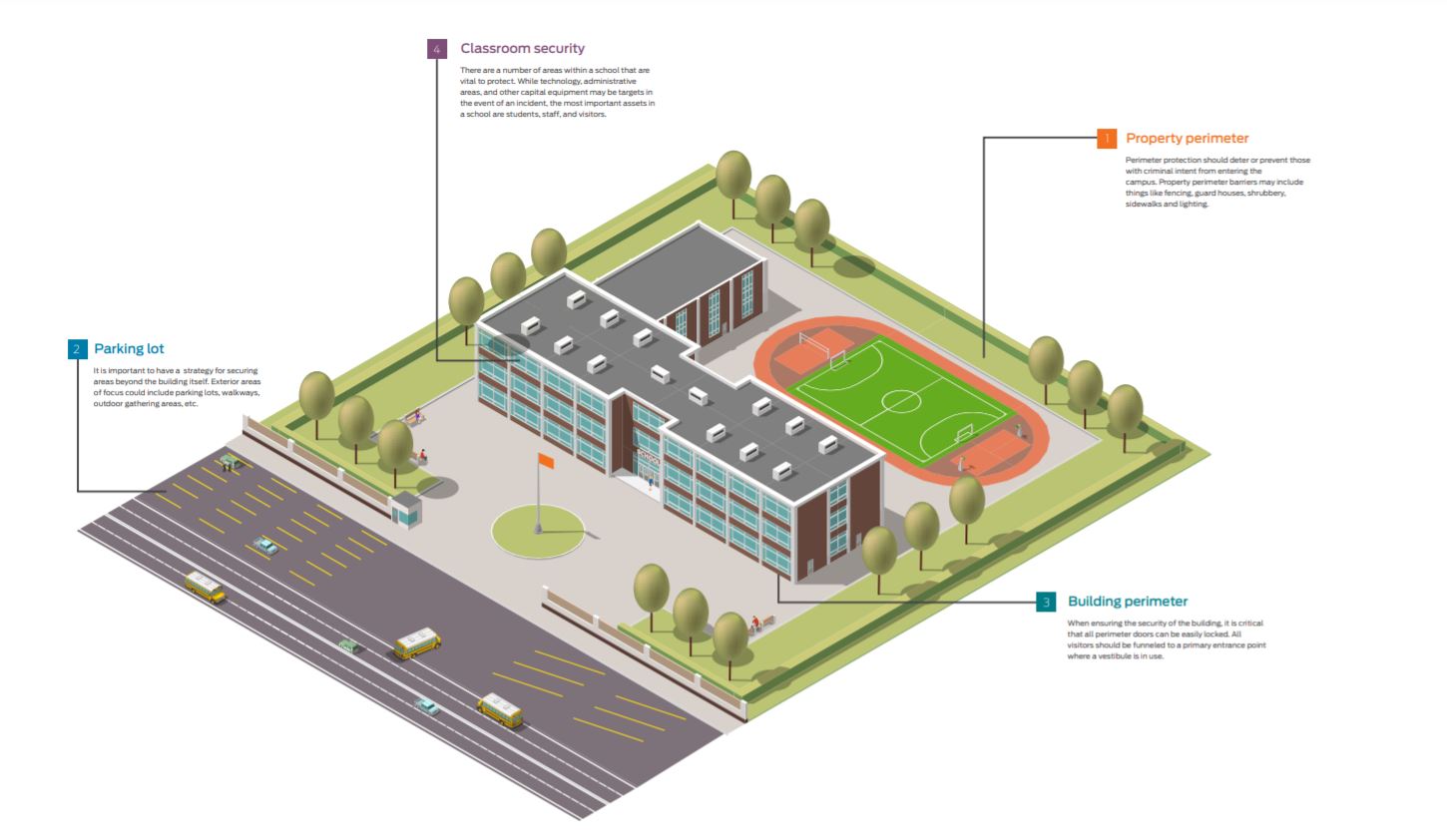 Unfortunately for school officials, there is no crystal ball for predicting security threats, and even the most stringent risk assessment and mitigation do not equate to total risk elimination. “Even with the best policies, procedures and equipment in place, no facility can ever be 100 percent secure,” says Timm.

“Risk can never be eliminated, only managed”

That is not to say, however, that risks cannot be identified, measured and reduced. By partnering with qualified security professionals and other experts, school officials can quantify and mitigate risks effectively. This is evidenced by the 2017 report recently released by the National Center for Education Statistics, which found that “between 1992 and 2016, total victimization rates for students ages 12–18 declined both at school and away from school. Specific crime types—thefts, violent victimizations and serious violent victimizations—all declined between 1992 and 2016, both at and away from school.”

Although the public perception might be that school violence is increasing, actual statistics show just the opposite. In 1993, there were nearly 200 victimization incidents per 1,000 students. In 2016, there were fewer than 25. This is a dramatic decline that directly correlates to increased security measures. The report states that, “The percentage of students who reported locked entrance or exit doors during the day increased between 1999 and 2015, from 38 to 78 percent. The percentage of public schools reporting the use of security cameras increased from 19 percent in 1999–2000 to 81 percent in 2015–16. Similarly, the percentage of public schools reporting that they controlled access to school buildings increased from 75 percent to 94 percent during this period.”

It is easy to overlook the progress that’s been made in making schools more secure, particularly in the face of such horrors as Newtown and Parkland, but it is vital that school officials not lose perspective in the rush to enhance security. There are safe and effective ways to make a campus more secure, and security experts available to help school officials navigate what can seem like an overwhelming process and ensure that life safety is not compromised in the effort to increase security.