Case Study: The University of Texas at Austin 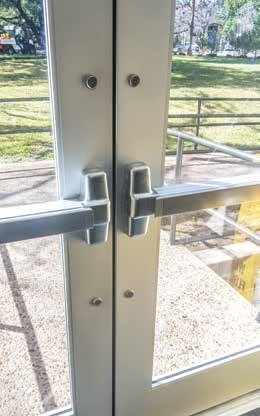 With over 50,000 students, the University of Texas at Austin is one of the largest schools in the United States. The main campus has 150 buildings totaling over 18,000,000 square feet, which translates to more doors than Richard Costa can even count. As the university’s construction hardware planner, he functions as the resident door expert, reviewing construction documents, hardware schedules, and ensuring the campus complies with ADA and life safety codes.

“It’s a big campus and I’m the only person who does my job,” he says simply.

He began working for the University nine years ago, and soon found that much of his time was being spent helping the facilities maintenance personnel adjust the concealed rod exit devices that had been installed on the campus’ exterior doors.

“We’ve got four different zones for maintenance, and every time they have issues they call me,” he says with a laugh. Over the course of an average year, he would see thousands of work orders that involved adjusting rods and those repairs were never easy.

In addition to taking up a great deal of Costa’s time, it was also creating safety and security risks on campus.

Desperate for a better solution, Costa talked to his local Allegion representative and learned about Von Duprin’s Concealed Vertical Cable System. “The first pair I installed and I haven’t touched since - and that was almost five years ago, right after they became available!”

This revolutionary system replaces traditional rods with proven cable technology that provides greater security for the opening, with the streamlined aesthetics that architects and customers prefer.

With its unique cable system, the CVC eliminates the challenges of traditional rods and enables it to perform in less than ideal conditions. The flexibility and slack in the cable system allows the device to function properly even if the top latch, device centerline and bottom latch are not vertically aligned. Therefore, the concealed vertical system is not as sensitive to changing door conditions and requires significantly less maintenance than a traditional rod over its lifetime..

Costa was so impressed with the new cable-based design that he immediately began pushing to replace all of the older concealed rod devices with the CVC system. “We’re trying to get away from the concealed vertical rods, so whenever we can, we’ll go with the cables,” he says. “They work better with security, and are easier to adjust, you don’t have to worry about the rods slipping or dropping. Once you get the cables adjusted, you don’t have to come back and readjust them.”

If maintenance is needed, however, the CVC system allows for adjustments to be made to the bottom latch while the door is hanging. The latch height is easily adjustable through the side of the door with a spring pin. This eliminates the need for two people to spend valuable time removing and rehanging a door.

So far, Costa has installed roughly 60 pairs of CVC exit devices throughout the UT campus and hasn’t had any maintenance issues. As the older concealed rods fail or the doors they’re installed on are slated for a security upgrade, they’re being replaced with Von Duprin’s CVC devices. Eventually, Costa plans to have them installed on over 1,000 doors throughout the campus - a plan he felt confident about.

“We told them we’re going to extend the life of these doors by doing this because we’re not going to have as many adjustment issues or problems,” he says. “You’ve doubled the lifespan of the doors just by changing them to cables - which is saving you a lot of money in the long run.”

In addition to solving the maintenance and security issues, the CVC devices have also provided an unexpected benefit - silence. “Cables don’t make any noise, whereas rods you could always hear rattling around the door,” says Costa. “With the cables you don’t hear anything and a lot of places with office buildings or even our libraries and stuff like that, they like that you can’t hear the door anymore.”