An early adopter of mobile credentials, the University of Tennessee, Knoxville, put a better campus experience in its students’ hands.

University of Tennessee, Knoxville, welcomes nearly 29,000 students to its campus every fall. With a high volume of students and faculty sauntering around the university, which spans 910 acres with 294 buildings, there is one thing everyone has come to rely on: the VolCard.

In October 2019, the university launched a new campus card experience for the students. As a result, VolCard holders enjoy even more seamless transactions and access as they go about their daily routines. By implementing a mobile credential solution, University of Tennessee, Knoxville, met the demands of its tech-savvy students while improving operational efficiencies. Furthermore, the university is now better prepared for students to return to campus in the fall following recent COVID-19 guidelines.

A benefit the school couldn’t have predicted is how the mobile credentials will help during its orientations. Due to COVID-19, orientations did not take place on campus over the 2020 summer, which is when students traditionally receive their VolCards.

Mobile credentials are attractive to this generation, a group almost always guaranteed to have their phones with them as they move about campus. Mobile credentials make it easier and more convenient for students and faculty to access buildings like residence halls or the library, as well as to make payments on and around campus. From coffee to laundry and other purchases, students just need a smartphone or smart watch to go about their daily routines. They grew up with this technology, and they expect it from their university.

Universities benefit from being able to remotely issue credentials over-the-air. Mobile credentials are protected by two-factor authentication and can be remotely deactivated by the student or university. The team at University of Tennessee, Knoxville, was also excited about the possibility of cutting down on plastic card production.

However, the university’s access hardware wasn’t compatible with a mobile solution that could fit its needs. A transition would require changing all the readers on campus—no small feat for a campus of its size.

The decision to invest in mobile credentials happened around the time that Allegion and CBORD were developing a mobile solution with Apple, which launched in 2019. The mobile credential leverages the industry-leading global standard NXP DESFire EV1 security technology to provide higher education campuses with an easy-to-implement solution for the enablement of contactless student IDs for iPhone and Apple Watch. The user experience with NFC on Apple devices enables a seamless and secure user experience. The user presents the iPhone or Apple Watch near the reader without the need to unlock the device or open an application. With the mobile student ID, users now have the convenience of using their phones for everyday transactions. Schlage® AD electronic locks, NDE and LE networked wireless locks and MT multi-technology readers support contactless student IDs in Apple Wallet using CBORD’s CS Gold software.

“We were excited to introduce mobile student IDs on iPhone and Apple Watch because they provide an extra level of convenience, security and peace of mind for students as they enjoy everyday college life,” said Jennifer Bailey, Apple’s vice president of internet services. “Students can easily get around campus and also avoid touching readers—which has become even more important today—by just tapping their iPhone and Apple Watch.”

“There has been interest building for a mobile credential solution at University of Tennessee, Knoxville, for a few years,” said Mark Beckerman, regional account manager at CBORD. “They wanted to do it for the students and the student experience. As soon as this solution was in development, I knew Bill and his team would be on board.”

Strickland and Mike Henderson, VolCard technology supervisor, quickly found it wasn’t just the students who wanted mobile credentials; the idea piqued the interest of many at the university, including Senior Vice Chancellor Finance and Administration Chris Cimino.

“As an institution that values innovation, it’s important to us that we are always adapting to the way students use technology to enhance the campus experience,” said Cimino. “Being able to access the VolCard on your mobile device is another way UT is continuously improving to meet expectations for a modern campus.”

With several departments on board and the approval of Cimino, University of Tennessee, Knoxville, was the first to implement the mobile solution from CBORD and Allegion in Apple Wallet.

Process: The path to mobile credentials

“When migrating to a newer technology, like mobile credentials, there’s work to do on the front end, like with any campus security update,” said Mark Werner, end user sales consultant at Allegion. “The team at the University of Tennessee, Knoxville, did a tremendous job of coordinating with their teams and upgrading thousands of readers.”

One of the first steps for Strickland and Henderson was defining use case across campus.

“Essentially, we had to find every reader on campus where a student could use their VolCard and figure out a way that a mobile credential would work there,” said Henderson. “That was challenging because there were places that we didn’t even know about at first. There were some external systems, like at the recreation center, that were a little more challenging than others, but we got everything squared away with the support of our teams from other departments.”

To move forward, it’s important for colleges and universities to understand every single way a student uses a card on campus. Entering the dining hall, accessing the fitness center, opening residence hall doors—all of it needs documented. This is essential for the rest of the process to go smoothly. Without the use case assessment, it’s easy to miss things. The school might have placed an order, got in the field, realized they missed something and had to reorder hardware. It’s imperative to coordinate with all the stakeholders upfront, like Strickland and his team did at Tennessee.

The next task was replacing hardware. Roughly 5,000 readers throughout campus needed to be upgraded or replaced to support the new mobile credential solution with Allegion. Henderson’s team replaced a majority of the readers while students were away over summer break. They converted competitive card readers to the Schlage® MT wired multi-technology readers and updated the reader modules in their AD-400 networked wireless locks. Designed for flexibility, Schlage multi-technology readers allow campuses to easily transition from proximity or magnetic stripe technology to more secure, encrypted credentials, like mobile credentials in the Apple wallet or smart cards. The university also upgraded its physical campus card technology to Schlage smart credentials using MIFARE DESFire EV1. Students still needed to use a physical card until the mobile credential solution was available. While the readers were being replaced, the card office was busy printing 30,000 smart cards for students when they returned for the fall semester. It was an all-hands-on-deck effort. But it went smoothly, according to Henderson.

Betty Smith, VolCard office manager, used an on-demand protocol for printing all the cards. Cards were preprinted as buildings were being converted to the new card technology and distributed once the buildings came online with the new technology. The VolCard printers were operating at full capacity during the summer of 2019.

“I was very proud of the entire VolCard staff during this project,” said Strickland. “Despite the enormity of the task, Smith’s office put forth a herculean effort. Her team maintained the card production with the building upgrades while still serving the campus community and dealing with orientation students all summer. Mike Henderson’s team kept up an unbelievable pace of upgrades to make sure we were ready in the fall.”

“We had some hurdles, but I think we paved the way,” said Strickland. “We were the first CBORD school to have the digital ID, and I think it will be much easier for other schools to get there.”

The implementation timeframe depends on the hardware and technology already in use. If newer readers were recently installed, it’s likely that less hardware will need replaced. Compatibility and interoperability are other important factors in the process.

Larry Delaney, vice president of strategic alliances at CBORD agreed: “The University of Tennessee, Knoxville, was the first of four campuses to pilot the mobile credential program with Apple. Our long-standing partnerships with the university and Allegion made this launch a success and helped better prepare us to implement this technology on more campuses in the future.”

The mobile VolCard has received overwhelming positive feedback from students and faculty since the launch in October 2019.

“Students that I’ve encountered absolutely love it,” Henderson said. “The ones who have the mobile credential don’t even carry their cards anymore. I haven’t swiped my card for building access since October, and I use my Apple Watch 99 percent of the time; I don’t even need to get out my phone.”

Delaney adds, “It’s very convenient to be able to present your phone to a reader for access and transactions. Apple improved the user experience by adding a feature that pops up, even if a phone is locked, to show the student his or her balances in different campus accounts. It sounds trivial, but the way students had to get that in the past was to talk to the dining hall attendant or open a separate mobile application. They automated a previously manual task, which adds value for the students.”

Henderson adds that the solution has also improved security and peace of mind on campus. “Phones are personal; people want to keep them in their possession. As a result, people aren’t giving away their phones like they might an ID card. This has lowered fraud and given us better insights into who is actually using the credential for access.”

Students are also less likely to lose their phones. In the event that it is lost or stolen, the phone can be locked so that the mobile credential is inaccessible. Students can easily do this through their iCloud account or on the school website, which directly locks the IDs in CS Gold.

Moving to mobile credentials has cut down on the number of plastic IDs the card office has had to reprint for students throughout the year. And the school expects to see extraordinary reduction moving forward as students go mobile during future orientations.

A benefit the school couldn’t have predicted is how the mobile credentials will help during its orientations. Due to COVID-19, orientations did not take place on campus over the 2020 summer, which is when students traditionally receive their VolCards. This is the first orientation process for the university with digital student IDs, so they were happy that students could take advantage of the mobile credentials. They are issued virtually, so there is less in-person contact needed.

Furthermore, there is some peace of mind knowing that a majority of students will be able to come back to a campus that is contactless in terms of transactions. They don’t have to touch a keypad or pass their card to someone else. It’s easy and more hygienic.

In April 2021, the university launched a mobile solution for Android users on campus, so now students with either smart phone can choose to use mobile credentials for access and payment on campus.

University of Tennessee, Knoxville, improved the student experience, security and efficiencies by transitioning to mobile credentials. Many schools have reached out to the university for advice, especially with rising concerns about COVID-19.  If you’re interested in learning more about mobile credential options, visit allegionmobilecampus.com or contact Allegion. 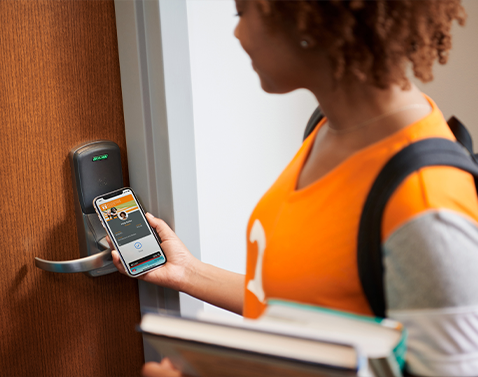 How to choose a new campus card technology


When it’s time to start exploring a new campus card platform, these questions can help get the process started. 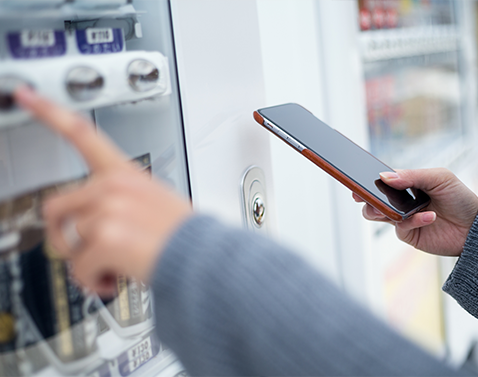 
It’s time to ask: Is your campus prepared to adopt a mobile ecosystem and the value it brings?